Bon Jovi, as announced earlier this month, was given the 'Music International' category because of "their first class songwriting on their current album 'Lost Highway'." The rock band took the honor after giving live performance of their hit 'Till We Ain't Strangers Anymore'.

R'n'B singer Rihanna also took the stage to give a performance. Other notable musicians who attended the event was Sarah Brightman and Andrea Bocelli.

The award-handing ceremony took place in Dusseldorf, Germany on Thursday, November 2007. It also honors other fields beside entertainment, such as sports, politics and economy. The show was aired live on German television, ARD. (CNN) -- Jon Bon Jovi's heroes are two women who live and work by a simple motto: "None of us are home until all of us are home."

Sister Mary Scullion and Joan Dawson McConnon founded Project H.O.M.E. in Philadelphia, Pennsylvania, in 1989 in an effort to eradicate homelessness wherever possible.

Word of their efforts soon reached the musician and actor, who is also co-owner of arena football team Philadelphia Soul. From the inception of the franchise, Bon Jovi's mission has been to use the team to give back to the community.

He met Scullion and McConnon about three years ago and has been using his rock star Rolodex to woo high-profile supporters and garner attention for Project H.O.M.E. ever since. H.O.M.E. stands for Housing, Opportunities for Employment, Medical Care and Education.

"They to me are what heroes can and should be," said Bon Jovi. "Ordinary people taking on an extraordinary cause and making a huge difference in that community."

The National Coalition for the Homeless estimates that close 3.5 million people in the United States are without a home. Scullion and McConnon are determined to reduce those numbers.

"It just struck me that in this country, where there's so much that nobody should have to put their body on a vent or in a doorway to sleep. It was just unacceptable," says McConnon.

Scullion and McConnon knew they had to do more than simply get people off the streets and into shelters.

"We wanted to find a way to provide opportunities for employment where people could gain some experience, some confidence and then as a springboard to go out into the competitive employment," says Scullion.

"So from the very beginning ... it was free units of housing. But on the first floor we also provided space for a restaurant, a catering business, a bookstore and a thrift store ... And the residents would be employed through these various businesses."

The approach worked. Since 1989, through a combination of street outreach, housing, health care, education and employment, Project H.O.M.E. has helped thousands of people break the cycle of homelessness and poverty.

And since they met Bon Jovi, the trio have built a mutually beneficial working relationship.

Bon Jovi works with Project H.O.M.E. as a spokesperson, while Scullion offers advice and insight to his Philadelphia Soul Charitable Foundation, the philanthropic arm of the football franchise, which after three seasons has given $2 million to local causes.

"Jon Bon Jovi's leadership has truly been invaluable," says Scullion. "He's opened so many doors, so many venues, not just for Project H.O.M.E. but for the issue of homelessness."

Phase V is a project that will renovate 15 row houses in one of Philadelphia's most poverty-stricken neighborhoods. The project represents an innovative public-private partnership with funds coming in from both sectors.

Bon Jovi said Scullion and McConnon have inspired him, and that they deserve the credit for bringing about change. Proceeds from the 8 p.m. show will benefit the Valerie Fund Center at Children's Hospital at Monmouth Medical Center, which provides comprehensive support for children with cancer and blood disorders. Bandiera is the musical director of the annual charity concert.

There is a limit of four tickets per person.

At the time of purchase, ticket buyers will receive a receipt, which they will have to show at the door with photo ID on the night of the show to claim their tickets.

The Count Basie Theatre has 1,543 seats. Theater officials said 350 sponsor tickets have been pre-sold, with 1,193 tickets to be sold to the general public. The theater will have three box office windows and three phone lines operating simultaneously. It's estimated that the first 125 to 150 people on line and the first 125 to 150 callers will successfully purchase tickets before the show sells out.

The concert is being sponsored by Saker ShopRite, the Silver Family Foundation, the Membership Rewards Program from American Express and two anonymous donors.

Today I had the chance to attend a special event organised by a French fan who holds a forum based on Bon Jovi (Sabi from foreverbonjovi.com) and two girls working at Universal France... A private session and projection of the Lost Highway DVD at the Hard Rock Cafe in Paris Boulevard Montmartre !

Here in Europe and specially in France, the LH DVD will be on sell only on Monday 26th.

This previewed session was great and well-organised, I shared this special moment with other French fans and had been thrilled by the guys performance !

I loved the place !! The Hard Rock Cafe has to be visited ! 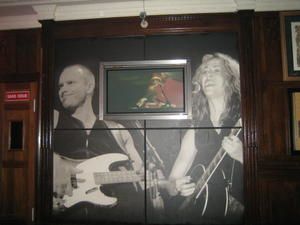 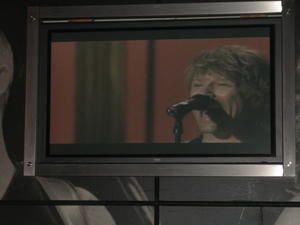