Politicians of All Stripes Join the Line for Bon Jovi 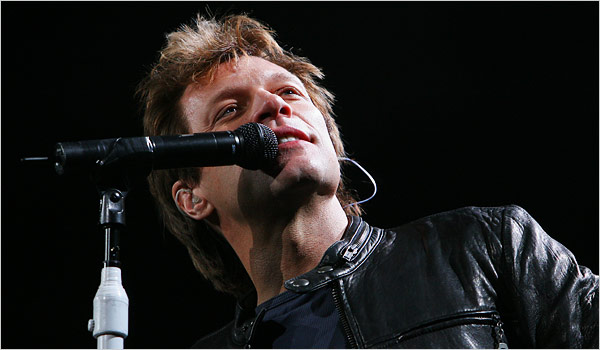 Jon Bon Jovi at the Prudential Center in Newark in October.

He calls her “Mrs. C.” And she calls on him to add a little celebrity gloss to her presidential campaign.

Jon Bon Jovi and Hillary Rodham Clinton have been friends for more than a decade, uniting for state dinners at the White House and campaign fund-raisers in the Hamptons.

If it seems strange that a rocker who sings paeans of working-class New Jersey is so friendly with a senator and former first lady who chose a Celine Dion song for the theme of her presidential campaign, consider a few items on Mr. Bon Jovi’s social calendar in the last few months.

There were dinners in East Hampton with Mrs. Clinton and another Democratic presidential candidate, John Edwards. Senator Barack Obama, her fiercest rival for the nomination, asked Mr. Bon Jovi to hear him speak in Midtown Manhattan. And Al Gore caught up with him in London for a photo op.

In New Jersey, it is practically a requirement for any high-ranking politician to attend at least one of his shows. And despite his left-leaning political allegiances, Democrats and Republicans alike seek him out as if he were New Jersey’s very own Bono.

When former Gov. Christie Whitman was deciding whether to build a sports arena in Camden, she consulted Mr. Bon Jovi — part owner of the Arena Football League team the Philadelphia Soul — and took his advice to pass it up. When Newark needed a marquee name to christen the Prudential Center, one of its most important new developments in decades, it turned to him.

“He basically says, ‘Hey, here’s where I’m from, like it or not,’ ” said Ms. Whitman, a Republican who later became administrator of the Environmental Protection Agency under President Bush. “And that’s refreshing for the state of New Jersey because we don’t have a lot of that.”

Former New Jersey governors, senators and state legislators who have worked or played with him over the years say it is a combination of his fealty to New Jersey and his blue-collar authenticity that draws politicians to him. And as someone who sings about his “plastic dashboard Jesus” and performs at concerts to fight global warming, his appeal is broad.

Unlike many other celebrities, he keeps his thoughts about the war in Iraq and President Bush largely to himself. While fellow New Jerseyan Bruce Springsteen is not shy about taking Mr. Bush to task and speaks out against the war on his new album, Mr. Bon Jovi is more comfortable talking about poverty and affordable housing. And his attention to those causes has earned him an audience with some of the country’s biggest political names.

“My impression of Jon Bon Jovi is every time he’s been asked to help his state, he’s done it,” said former Gov. Thomas H. Kean Sr., a Republican. “We have an enormous amount of entertainers in New Jersey, and I can’t say that about a lot of them.”

Mr. Bon Jovi’s high visibility recently touched off speculation in gossip columns that he had designs on running for office, possibly governor, because he is keeping his estate in Middletown even though he and his family spend most of their time in Manhattan now.

But Mr. Bon Jovi dismissed the rumors. Life as a rock star, he said, suited him quite well. In a recent telephone interview from London, he recounted a conversation with former President Bill Clinton about two years ago.

The two were on a flight to Maryland for a day of horse racing at Pimlico with some friends when someone asked them to compare occupations. “He said ‘Mr. President, which is better, your job or Jon’s?’ I said, ‘I know the answer to that. Mine, because I get to keep the airplane and the house.’ ”

John Francis Bongiovi Jr. was born into a working-class Italian-American family in north central New Jersey. His father is a marine turned hairdresser, and his mother, a onetime Playboy bunny.

Superstardom came to him and his band in the 1980s with hits like “Livin’ on a Prayer” and “You Give Love a Bad Name” when the formula for successful rock ’n’ roll was big hair plus big sound equals big sales. He has had just as many hairstyles as Cher, whose songs he once produced, and a penchant for jeans tight enough to suit Robert Plant.

His political hobnobbing began in the 1990s, when he started popping up at events during the Clinton years: a state dinner here, a White House Correspondents’ Association dinner there. Mr. Bon Jovi even sang to Mr. Clinton, whose 1992 presidential campaign piqued his political sensibilities, at Radio City Music Hall for the former president’s 50th birthday celebration in 1996.

Yet his political side came as somewhat of a surprise to people who know him.

“Who would have thought?” said John S. Wisniewski, a Democratic assemblyman who graduated from Sayreville War Memorial High School with Mr. Bon Jovi. “I’m probably one of the few people in my graduating class who was involved in politics then and involved in politics now. And most of my friends looked at me like I had two heads.”

In the 2000 presidential campaign, Mr. Bon Jovi held a fund-raiser at his Middletown home for Mr. Gore. And at campaign rallies, Mr. Bon Jovi and Richie Sambora, a member of his band, performed acoustic renditions of their hits. He remains friends with Mr. Gore, and when the two got together this month in London, their conversation quickly turned to the 2008 election.

Mr. Bon Jovi said Mr. Gore asked whether he had endorsed anyone for president, and he replied that he had not. “My deepest hope was that he was going to put his hat back in the ring,” Mr. Bon Jovi said. “I’ve been waiting for that for eight years.”

In 2004, Mr. Bon Jovi jumped back into the role of rock star Democratic fund-raiser and held an event for John Kerry at his home. Mr. Bon Jovi also joined Mr. Kerry and his running mate, Mr. Edwards, on the road. He and Mr. Edwards found they had a common interest in poverty issues.

Mr. Bon Jovi and Mrs. Clinton have been known to delve into issues like affordable housing and his work building homes with Habitat for Humanity in Philadelphia. But their conversations are not always so heavy. “She seems to really like to hear me play,” Mr. Bon Jovi said.

Mr. Bon Jovi donated $2,300 to Mrs. Clinton this year, as much as he is allowed to under the law. “I have no issue with a woman in power,” he said. “My life has always been run by women. If it wasn’t my mother, it was my wife. And if it wasn’t my wife it was my daughter.”

While Mr. Bon Jovi rubs elbows with some national political stars, he has been involved locally. Last year, when the state was looking for a catchy advertising campaign to stimulate tourism, Mr. Bon Jovi agreed to donate the rights to his hit “Who Says You Can’t Go Home,” and the state made it the theme of a national television commercial. Now there is a bill before the Legislature to make it the state’s official song.

While his political activism might have won him the respect of many of New Jersey’s political leaders, not everyone has been so blown away. “I know he’s been terrific and up front for New Jersey causes,” said Brendan Byrne, an 83-year-old Democrat who was governor from 1974 to 1982. “But I’m more in the Frank Sinatra era.”

Senator Frank Lautenberg, who is also 83, said that at his age, it took a little effort to be a Bon Jovi fan. “In order to watch Bon Jovi, there is a particular requirement of spectators: Stand up. Don’t sit down,” said Mr. Lautenberg, who went to one of Bon Jovi’s shows at the Prudential Center. “So I had to stand for two and a half hours.” Merry Christmas to all of you !!!

INTRO, LOST HIGHWAY, SUMMERTIME, WHOLE LOT OF LEAVIN', LAST NIGHT, (YOU WANT TO) MAKE A MEMORY, ANY OTHER DAY, TILL WE AIN'T STRANGERS, ANYMORE, SEAT NEXT TO YOU, ONE STEP CLOSER, EVERYBODY'S BROKEN, WE GOT IT GOIN' ON, I LOVE THIS TOWN, PRAYER, BAD NAME, FAITH, RUNAWAY, IT'S MY LIFE, BORN TO BE MY BABY, KNOCKIN' ON HEAVEN'S DOOR (Bob Dylan Cover Tune), BLAZE OF GLORY, HAVE A NICE DAY, SLEEP, WHO SAY'S YOU CAN'T GO HOME, BAD MEDICINE W/ SHOUT

INTRO, LOST HIGHWAY, BAD NAME, RAISE YOUR HANDS, RUNAWAY, OLDER, KEEP THE FAITH, WHOLE LOT OF LEAVIN', TILL WE AIN'T STRANGERS ANYMORE, BORN TO BE MY BABY, WE GOT IT GOIN' ON, IT'S MY LIFE, BAD MEDICINE W/ SHOUT, STRANGER IN THIS TOWN - RICHIE VOX, (YOU WANT TO) MAKE A MEMORY, DIAMOND RING, SATURDAY NIGHT, MYSTERY TRAIN, BLOOD ON BLOOD
SLEEP, WHO SAYS YOU CAN'T GO HOME, PRAYER

INTRO, LOST HIGHWAY, BAD NAME, RAISE YOUR HANDS, RUNAWAY, OLDER, KEEP THE FAITH, WHOLE LOT OF LEAVIN', TILL WE AIN'T STRANGERS ANYMORE, BORN TO BE MY BABY, WE GOT IT GOIN' ON, IT'S MY LIFE, BAD MEDICINE W/ SHOUT, STRANGER IN THIS TOWN - RICHIE VOX, (YOU WANT TO) MAKE A MEMORY, DIAMOND RING, NEVER SAY GOODBYE, MYSTERY TRAIN, BLOOD ON BLOOD, SLEEP, WHO SAYS YOU CAN'T GO HOME, PRAYER

Rappel : SANTA CLAUS IS COMING TO TOWN, RUN RUN RUDOLPH, I'LL BE THERE FOR YOU, WANTED, TWIST & SHOUT, TREAT HER RIGHT !

INTRO, LOST HIGHWAY, BAD NAME, WILD IN THE STREETS, RUNAWAY, OLDER, WHOLE LOT OF LEAVIN', TILL WE AIN'T STRANGERS ANYMORE, BORN TO BE MY BABY, WE GOT IT GOIN' ON, SUMMERTIME, IT'S MY LIFE, BAD MEDICINE W/ SHOUT, THESE DAYS - RICHIE VOX, (YOU WANT TO) MAKE A MEMORY, I'LL BE THERE FOR YOU, BED OF ROSES, SLEEP, HAVE A NICE DAY, WHO SAYS YOU CAN'T GO HOME, PRAYER