The day after playing a packed show in Sydney's Acer Arena, Bryan was still pumped up.

And, he says, playing live is almost as good as sex.

"It's the f***ing best time you can have with your clothes on, I always say," Bryan laughs.

Even after more than two decades of performing, releasing 10 albums and taking home a trove of Grammy awards, Bon Jovi still get overwhelmed playing to an audience of thousands.

"It's still amazing and you're looking around and people are way the f*** up there and everyone is just going mad and having a good time," he says.

Bryan, a founding member of the rock group, says live shows are a great way to escape from the real world.

"I always said I can't wait to get on the stage so I can get some peace and quiet.

"The whole world just stops for a minute."

"That was a quote I stole from (Rolling Stones') Ron Wood. He said, `I can't wait to walk on stage so I can get some peace and quiet.'

"And that made so much sense because the whole world and your problems and your life are just waiting for two and half hours."

The album debuted at number five on the Australian pop charts in June. It held the top spot on the country charts for three weeks after its release, and stayed in the country top ten for over two months.

The band also won the Grammy Award for Best Country Collaboration with Vocals for their song Who Says You Can't Go Home, from their 2005 album Have a Nice Day.

Bryan says venturing into the country music scene was an interesting journey for Bon Jovi, who usually dominate the pop charts.

"When we started out on this record, like every other record you want to expand and try new things like a little experiment," he says.

"Nothing wrong with expanding your audience.

"We didn't leave behind Bon Jovi fans but we gained new fans and it was interesting."

The rocker says attracting new Bon Jovi fans with every album and tour is thrilling.

"It's always amazing that (the fans) get younger and we don't lose who we have," he says.

"It's good to see that ten records in and 24 years later we're still current, we're still doing new things, we're still getting kids (to the shows)."

Bon Jovi are also passionate about helping fellow musicians, and on this tour they launched a radio competition to find an up-and-coming band to play at their Melbourne show.

Bryan says he was happy to be able to give young people the opportunity to get noticed.

"It's pretty neat to see kids that play in front of maybe a couple of hundred people and now in front of thousands.

"Just the look in their eyes - they're shitting in their pants because they didn't work their way up. It's like, bang, you're put into this situation."

Bryan, a classically trained pianist, says he never aspired to be in one of the biggest rock bands in the world.

"I was just trying to get some chicks, be in a band."

GLAD ALL OVER - Dave Clark Five cover tune, LOST HIGHWAY
OLDER, BAD NAME, RAISE YOUR HANDS, RUNAWAY, SUMMERTIME, CAPT. CRASH, IN THESE ARMS, (YOU WANT TO) MAKE A MEMORY, WHOLE LOT OF LEAVIN', BORN TO BE MY BABY, WE GOT IT GOIN' ON, IT'S MY LIFE, BAD MEDICINE W/ SHOUT, I'LL BE THERE FOR YOU - RICHIE VOX, HAVE A NICE DAY, FAITH, SLEEP, WHO SAYS YOU CAN'T GO HOME, PRAYER

GLAD ALL OVER - Dave Clark Five cover tune, LOST HIGHWAY, BAD NAME, RAISE YOUR HANDS, RUNAWAY, RADIO SAVED MY LIFE, BLOOD ON BLOOD, IN THESE ARMS, BLAZE OF GLORY - w/ Knockin On Heavens Door , WHOLE LOT OF LEAVIN', BORN TO BE MY BABY, WE GOT IT GOIN' ON, IT'S MY LIFE, BAD MEDICINE W/ SHOUT, THESE DAYS - RICHIE VOX, (YOU WANT TO) MAKE A MEMORY, I'LL BE, THERE FOR YOU, BED OF ROSES, HAVE A NICE DAY, FAITH, SLEEP w/ Jumpin' Jack Flash & Dancin' In The Streets, WHO SAYS YOU CAN'T GO HOME, PRAYER,

Rappel : DIE FOR YOU, HALLELUJAH, WANTED, I LOVE THIS TOWN

Set list du concert de Sydney second soir
GREAT BALLS OF FIRE, BAD NAME, WILD IN THE STREETS, LOST HIGHWAY, RUNAWAY, SUMMERTIME, STORY OF MY LIFE, IN THESE ARMS, WHOLE LOT OF LEAVIN', BORN TO BE MY BABY, WE GOT IT GOIN' ON, IT'S MY LIFE, BAD MEDICINE, I'LL BE THERE FOR YOU - RICHIE VOX, BLAZE OF GLORY - Knockin On Heavens Door interlude, SATURDAY NIGHT, NEVER SAY GOODBYE, BLOOD ON BLOOD, FAITH, SLEEP - w/ Jumpin Jack Flash & Land Of 1000 Dances, WHO SAYS YOU CAN'T GO HOME, PRAYER

Rappel : HAVE A NICE DAY, WANTED, I LOVE THIS TOWN !
Source: Bonjovi.com 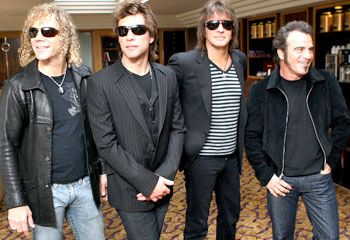 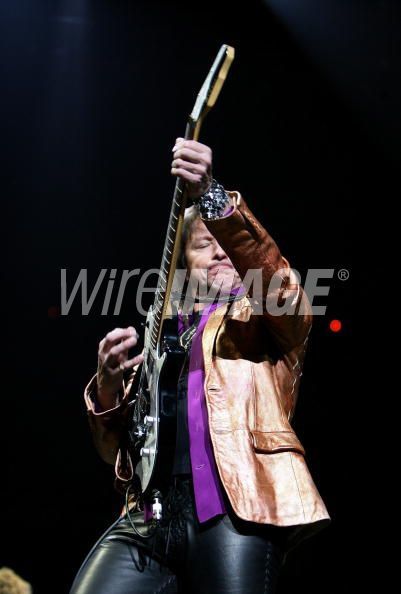 When The Shebang began the hunt for a band to support Bon Jovi, they weren't sure what to expect. Fifi thought that she'd cherrypick the group with the best looking frontman. Marty wanted a band who could rock, while Paul Murray just wanted to go back to sleep.

But of course, the choice came down to YOU! So after thousands of entries and votes, the search is over. The winner of the Bon Jovi support band competition is... Ooh La La!

The Sydney five-piece have built a hard-rockin' sound that's similar to Led Zeppelin, The Faces, and Lenny Kravitz. And now they're all set to rock out with Bon Jovi at the Acer Arena on January 21 and 22!

The Bon Jovi guitarist chats about backstage parties, rocking all night long and reveals which band will support them at Acer Arena!

Artists are threatening to boycott the Grammy Awards this year in support of picketing writers, who have been on strike for two months.

The boycott could see the Grammys reduced to a low-key affair similar to the Golden Globes last week, which was essentially a press conference.

The writers have been on strike for two months demanding better pay conditions and have been supported by musicians, actors and TV presenters.

The strike has cancelled numerous shows and made headlines all around the world.

GLAD ALL OVER - Dave Clark Five cover tune, LOST HIGHWAY, OLDER, BAD NAME, WILD IN THE STREETS, BORN TO BE MY BABY, BLOOD ON BLOOD, SUMMERTIME, LIVIN' IN SIN, WHOLE LOT OF LEAVIN', IN THESE ARMS, WE GOT IT GOIN' ON, IT'S MY LIFE, BAD MEDICINE, STRANGER - RICHIE VOX, HAVE A NICE DAY, FAITH, SLEEP W/ JUMPIN' JACK FLASH, WHO SAYS YOU CAN'T GO HOME, PRAYER

ENCORE:
HAVE A NICE DAY
WANTED
I LOVE THIS TOWN
CAPT. CRASH

LOST HIGHWAY, BAD NAME, RAISE YOUR HANDS, RUNAWAY, RADIO SAVED MY LIFE, SUMMERTIME, (YOU WANT TO) MAKE A MEMORY, WHOLE LOT OF LEAVIN', BORN TO BE MY BABY, WE GOT IT GOIN' ON, IT'S MY LIFE, BAD MEDICINE W/ SHOUT, THESE DAYS, CAPT. CRASH, SLEEP W/ JUMPIN' JACK FLASH, WHO SAYS YOU CAN'T GO HOME, PRAYER

Rappel : HAVE A NICE DAY, KEEP THE FAITH, I LOVE THIS TOWN, WANTED ! 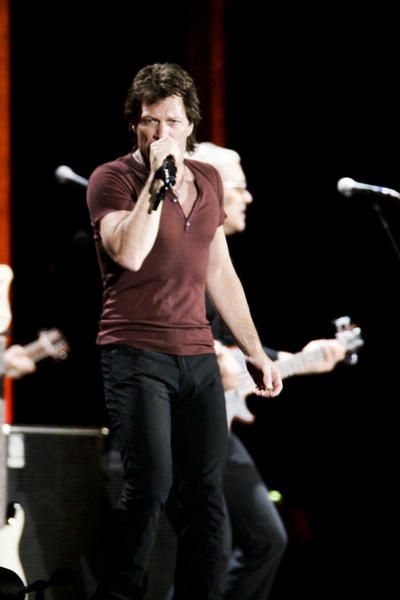